How the Economy As a Whole Works

The irregular and largely unpredictable fluctuations in economic activity, as measured by the production of goods and services or the number of people employed. 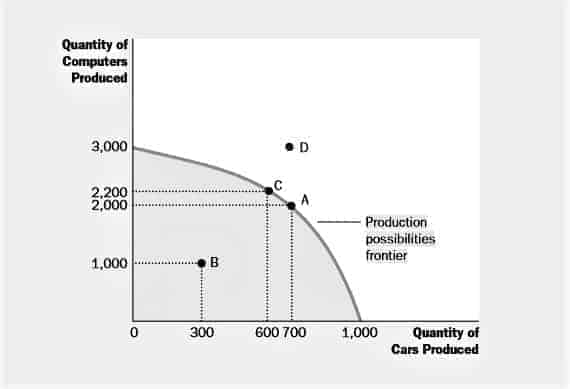 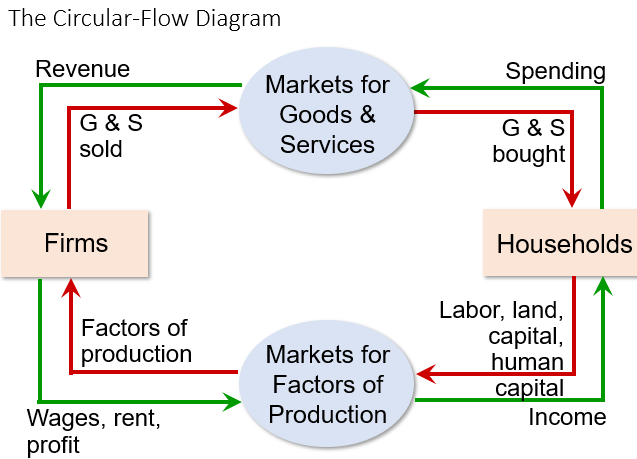 This diagram is a schematic representation of the organization of the economy. Decisions are made by households and firms. Households and firms interact in the markets for goods and services (where households are buyers and firms are sellers) and in the markets for the factors of production (where firms are buyers and households are sellers). The outer set of arrows shows the flow of dollars, and the inner set of arrows shows the corresponding flow of inputs and outputs.

In any market, buyers look at the price when determining how much to demand, and sellers look at the price when deciding how much to supply. As a result of the decisions that buyers and sellers make, market prices reflect both the value of a good to society and the cost to society of making the good. Smith’s great insight was that prices adjust to guide these individual buyers and sellers to reach outcomes that, in many cases, maximize the well-being of society as a whole.

Macroeconomics is the study of economy-wide phenomena, including inflation, unemployment, and economic growth

A market economy rewards people according to their ability to produce things that other people are willing to pay for. The world’s best basketball player earns more than the world’s best chess player simply because people are willing to pay more to watch basketball than chess. The invisible hand does not ensure that everyone has sufficient food, decent clothing, and adequate health-care. In practice, many public policies, such as the income tax and the welfare system, aim to achieve a more equal distribution of economic well-being.

In the presence of externalities or market power, well-designed public policy can enhance economic efficiency

One reason we need government is that the invisible hand can work its magic only if the government enforces the rules and maintains the institutions that are key to a market economy. Most important, market economies need institutions to enforce property rights so individuals can own and control scarce resources. A farmer won’t grow food if she expects her crop to be stolen; a restaurant won’t serve meals unless it is assured that customers will pay before they leave; and a film company won’t produce movies if too many potential customers avoid paying by making illegal copies. We all rely on government-provided police and courts to enforce our rights over the things we produce—and the invisible hand counts on our ability to enforce those rights

Physicists studying gravity can drop many objects in their laboratories to generate data to test their theories. By contrast, economists studying inflation are not allowed to manipulate a nation’s monetary policy simply to generate useful data. Economists, like astronomers and evolutionary biologists, usually have to make do with whatever data the world happens to give them.

When a person wears a seat belt, the probability of surviving an auto accident rises. When deciding how safely to drive, rational people compare, perhaps unconsciously, the marginal benefit from safer driving to the marginal cost. As a result, they drive more slowly and carefully when the benefit of increased safety is high. For example, when road conditions are icy, people drive more attentively and at lower speeds than they do when road conditions are clear. Seat belts make accidents less costly because they reduce the likelihood of injury or death. In other words, seat belts reduce the benefits of slow and careful driving. People respond to seat belts as they would to an improvement in road conditions—by driving faster and less carefully.